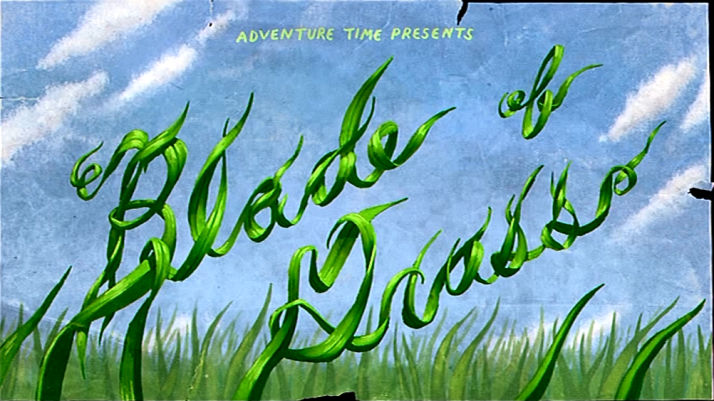 Blade of Grass effectively introduces a major plot point to not only the season, but the series as a whole. The introduction of the grass sword would open up a whole variety of doors for Finn’s character, as well as a future character down the line. Yet, despite some of its surreal imagery, this episode doesn’t feel especially heavy or impactful, but it doesn’t really need to be. Somvilay and Seo Kim efficiently worked together to create a fun and intriguing episode, and their best episode of the season overall. 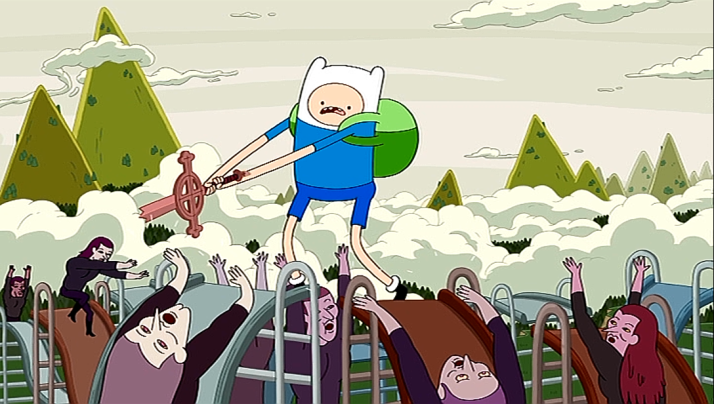 LOVE the way this one begins. It’s probably Adventure Time at its most odd, with Finn and Jake battling off a bunch of mullet-sporting zombies within a slide park. The idea alone is completely ludicrous enough to get a laugh out of me, and I still to this day have no fucking clue what the slider guys are supposed to be. On the more heartwarming side, Finn is still using his Demon Blood Sword even after it was previously smashed. It seems evident that this episode needed to happen for Finn to acquire a new blade, but I’m glad it does show how much of an attachment Finn had to the Demon Blood Sword. And why shouldn’t he? That sword was bangin’ and it came from his dad, the latter arguably having a bigger emotional impact on Finn in general.

I love the little farmer’s market introduced in this episode that becomes a recurring location from this point on. It feels very fitting with the world of Adventure Time, and I’m glad the series didn’t go full-out Root Beer Guy after said episode and turn the Land of Ooo into one big modern day metropolis. It’s nice to have little medieval elements like this sprinkled around. It’s also been quite some time since we’ve seen Choose Goose, so it was good to reintroduce him once more. I especially like both the callback to Blood Under the Skin and Play Date as Finn describes the armor that Choose Goose once gave him. 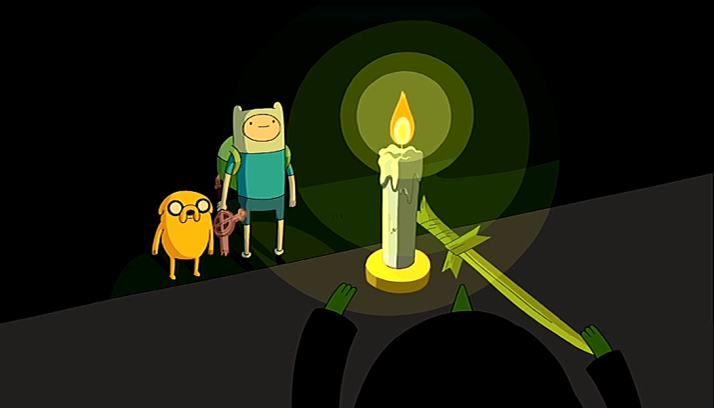 Once Finn receives the grass blade, the episode becomes an effective mixture between comedy and some horror elements. Again, I think this is some of Somvilay and Seo’s best joke telling, simply because it focuses mostly on the story while sprinkling in their own charms along the way. Occasionally, Somvilay’s focus on anti-humor can be so all-consuming and an effort to make the episode as non-jokey as possible that it simply becomes distracting and sometimes quite dry. Here, all of his non-jokes work naturally into the story in a way where his influence is still noticeable, but the episode as a whole doesn’t feel like his own experimental project. There are some nice gags throughout this one, like the random pizza that comes flying out of nowhere, or Finn finally ditching the sword and uttering, “worst three bucks I’ve ever spent.” Honestly, Finn, I love you buddy, but what were you really expecting here? Also, the battle outside of the candle shop is one of my favorite moments in the episode, again, mostly in terms of surreality. The “hooligans who steal candles” are silly renditions of cliched 60’s gang members, and Finn’s interactions with them are equally as hilarious. Also, I think the older candle store owner may surpass Slime Princess for my favorite character performed by Maria Bamford. I absolutely love her forced Irish accent.

Aside from the humor, the episode in general does a great job of showing how big of a threat the grass sword can be. There’s heavy bits of foreshadowing here, especially within the dream sequence and actions of the sword in general. In the dream, we see the grass sword completely consume Finn’s body as he becomes one whole “grass Finn.” And the way the sword cuts through objects and turns them into little Finn heads shows what a fascination the sword has with Finn in general. Obviously I don’t think they thought a ton into the future in terms of the whole “grass Finn” thing in this episode, but I’m glad the connection was made regardless. I just wish the sword was a bit more consistent with it; this is the only episode where the sword cuts objects into Finn shapes, and I think it’d be much less distracting if it wasn’t shown every single time Finn cuts into something following the pillow tag. To be fair, we don’t even really get to see this sword a ton as it is, so I can’t really blame this for being inconsistent. The grass sword in general is cool; I think it’s pretty neat how the entire blade is given weight and strength through the mere sounds that it makes. The blade as a whole looks pretty frail and inferior to Finn’s previous swords, though something as simple as the Grassy Wizard placing it down with a metal “clang” can make it feel a lot more powerful and effective. I enjoy the way it’s categorized as more than just a sword as well. The curse plays a very large part into its existence, and its focused on in all the right ways. I really like how the sword even possesses some elements that the Ice Crown does, in the sense that it longs for the person who wears it and is relentless in its efforts to be used. 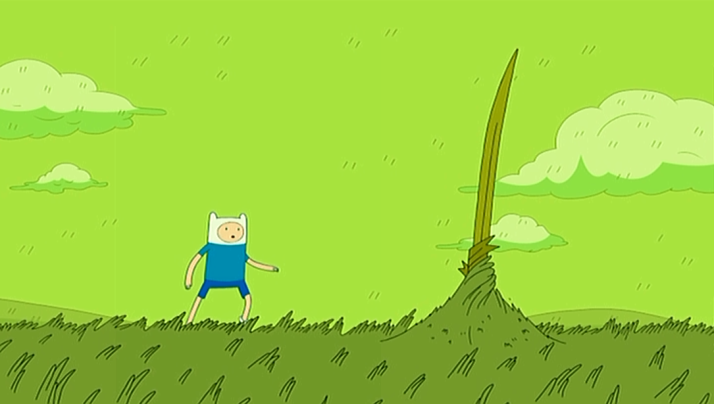 Finn realizes the weight of the curse as Choose Goose informs him, and I enjoy how Finn’s slow progression into actually liking the sword becomes clear following this moment. Oliver Sava over at the A.V. Club would point out that the grass sword has some sort of correlation with Finn’s sexual awakening, though I don’t really buy into that theory at all. If anything, it seems that the lifelong “curse” could correlate more into a lasting condition or mental illness of some sort. As Finn confronts the Grassy Wizard, he is informed that the curse will last forever, and that Finn’s casual response is not how one is supposed to react to that kind of news. Or Jake’s observation, “now that you’ve accepted it, you can control it!” I think it’s pretty obvious that Finn could easily go his entire life resisting the power of the sword and being in denial about its attachment to him, though Finn would much rather just accept his fate and come to terms with his eternal curse. Once he’s learned to accept reality and fate as it is, he can now control his feelings and issues as if they were never issues to begin with. It’s somewhat enlightening.

This episode is also filled with some really nice color schemes. I love it’s focus on the color green; it never feels too nauseating. The grassy mountain is a pretty cool place with some pretty neat beasts, and the Grassy Wizard in general is a pretty enjoyable dickhead. He would later be brought back in Do No Harm, and I’m glad he had at least on more part in the ongoing Grass Sword saga. 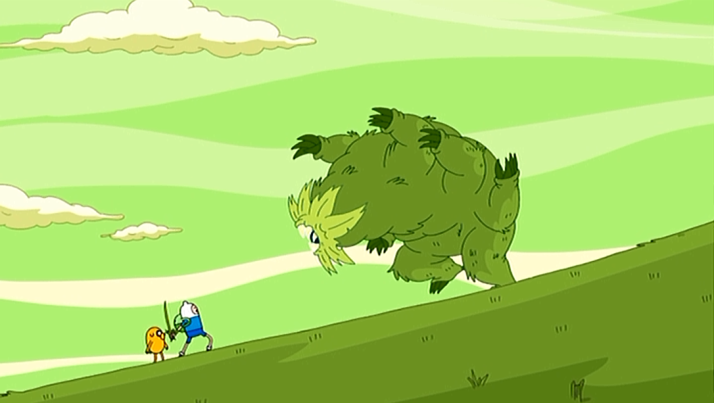 So yeah, this one is a blend of mostly fun and somewhat tense moments. It does a pretty great job of setting up the grass sword story as a whole, and I think it’s pretty obvious to any regular viewer at this point that Finn is going to lose his arm at any point now. It’s been alluded to so many times up to this point, and the grass sword only adds to the anticipation of Finn’s amputation. The de-arming comes soon enough, and while reactions amongst people on whether it was handled properly wildly ranges, I think it’s at least safe to say for now that we did get a pretty cool sword out of it regardless, even if it was short-lived.

A brief detour from my usual endings, but oh. my. Glob. Have y’all seen the new kidrobot Adventure Time figures? I’m actually obsessed, and I cannot wait for the damage my bank account is going to experience once they’re released. 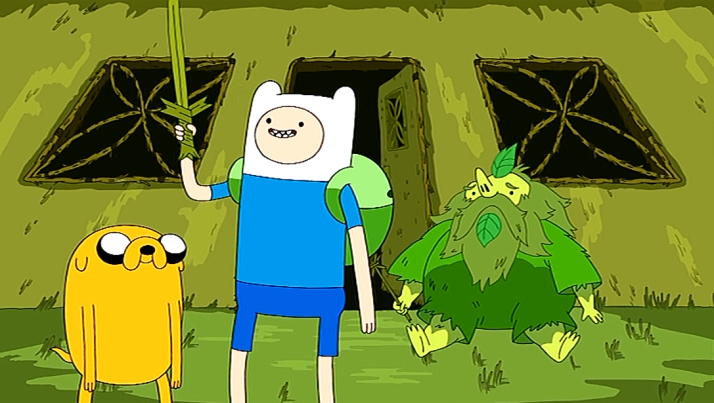