Beyond the Grotto is the fifth episode in the guest-animator series, and it’s likely the most unique so far. While the past four episodes in this series have been directed, animated, and written entirely by guest animator themselves, this episode is partially animated by Lindsay and Alex Small-Butera (creators of Baman Piderman) but was written, directed, and storyboarded by the usual AT staff members. This is an idea that I both like and dislike: I like it because my main complaint regarding the guest-animated episodes is that they seem to struggle most with matching the tone of the series. But at the same time, I feel like it kind of tarnishes a bit of the charm of each guest animator bringing wildly different styles and tones to the table. Like, there’s no denying that Water Park Prank is one of AT’s worst entries, but it still at least is so different and unique from every other episode in the series that it at least stands out on its own. And that’s not to say this one doesn’t, but I feel as though I could just as easily associate this episode as a “Somvilay and Seo episode,” rather than a guest-animator episode. Before I get too invested in rambling, I will say that this episode does achieve this blend between staff and guest very well, and actually makes the most sense logically out of any guest-animated episode thus far. While Food Chain had Magic Man there to transition into some of the more frenetic bits of animation, it still felt slightly different because of the animation switch throughout, where this episode only switches its style once Finn and Jake go “beyond the grotto.” This episode also boasts particularly strong and fluid animation, and is probably the most visually stunning among the guest series, aside from the aforementioned Food Chain. Though different from most guest-animated episodes, Beyond the Grotto still struggles from similar issues that a majority of the other episodes suffered from: a slightly lackluster story. 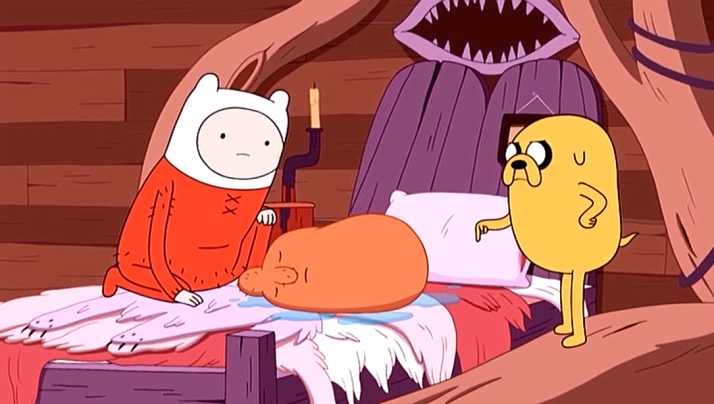 When it comes down to it, the story of this one is somewhat paper thin. Finn and Jake set out to save the Sea Lard after presumably drowning it, and come across a strange world where they forget themselves and the familiar faces around them. The stories within the world don’t really have any form of connecting story or theme (to my knowledge) and merely exist to show off random interpretations of several characters, including Marceline, BMO, PB, Ice King, Tree Trunks and Mr. Pig. No story in particular has a ton of substance, or is really subject to many funny moments. There’s a couple of unique and interesting moments: I think Marceline’s little song is pretty enjoyable, and I think it’s an especially funny idea that the cute, flower Marceline actually isn’t filled with sadness at all and just enjoys singing songs based on sadness. Though, it’s hard for me to read exactly what this says about Marceline’s character, and the other characters in general. Some inhabitants of the purple world seem to have some allusions to the inner workings of their counterparts, like how Ice King’s consumption of purple products contribute to his own memory loss is an obvious reference to the crown, but then there’s Bush Boots and the BMO Bee, who aren’t really anything beyond surface-level imitations of the characters they are supposed to represent. Thus, the episode feels kind of inconsistent on some level. When rewatching this one, I always feel like I’m going to pick up on something deeper that I didn’t notice at first, but I typically never do. That’s keeping in mind that not every episode has to have some sort of deeper meaning, but when faced with a totally balls-to-the-walls plot, I’d expect something either really funny or profound to go along with it, and this story doesn’t really provide for anything of the sorts. I do enjoy how this is essentially opening up for Finn and Jake to introduce themselves to all of the friends they’ve met over the years; Jake interacting with the Lady butterfly actually has him uttering, “you are crazy, you are sooo crazy,” which is a reference all the way back to the pilot. It’s also interesting to see that, even when forgetting their own identities, Finn and Jake are still invested in helping people out and saving the day. Even without knowing who they are, they’re still driven by kindness and down to lend a helping hand. One other thing worth nothing, BMO’s Bee poem contains these lines:

“Listen for a sound and look, look around. Unless egress is sought, smiles will be not found. Hmm? Hmm? It’s a metaphor.”

I do wonder if that line was used intentionally the reference The Hall of Egress and its ambiguous nature, or Finn’s journey through Egress in general.

While the story is nothing special in this one, the animation clearly justifies Beyond the Grotto’s existence. The fluidity and zing of the animation is terrific, and I love how it’s constantly moving, even when the characters are still. The wildly static lines remind me a lot of Ed, Edd n Eddy, and help the animation to really pop and standout. Also interesting, the characters are outlined with pencil rather than ink, which is another unique way to set this world apart as its own realm. The attention to color is vivid and beautiful in the way that it is constantly reacting with how the characters are shaded and reflect said lighting, especially when Finn and Jake essentially become mute to color in general. The backgrounds are mostly simplified to show off shapes rather than detail, and once again contributes to how beautiful, earthy colors infect every inch of scenery. Background painter Matt Cummings also guest stars on this one, creating gorgeously painted backgrounds with a keen sense of how he can use splotches of color to illuminate the realm’s surroundings.

The only aspect left to talk about with this one are the non-guest animated portions, which are actually some of my favorite parts of this one joke-wise. I love Shelby’s role as a know-it-all coming back once again after last episode, and him actually being wrong about the Sea Lard’s class which, to be fair, could easily be assumed after watching the lard presumably sink to his death. It’s also lovely to see the Water Nymphs once again who, per usual, are bizarre and mysterious characters. They also apparently make hot dogs from frogs, which is both intriguing and kind of repulsive. The interactions with Ice King towards the end are equally hilarious, as Jake once again shows that he isn’t fully adjusted to the IK’s quirky antics (“beat it, creep!”) and that Ice King’s memory is, as expected, still tragically beyond repair. The ending with the sea lard is also cute, though I don’t really get what the lard is all about, and the episode never really gives us any idea as to what his deal is. He’s kind of like the opposite of Gunther; with Gunther, you’re supposed to have some idea about what going on in his little penguin brain, but with the Lard, we’re not really given anything to work with. I do like how he’s essentially a seventh band member to the Treehouse Fort Fam, though upsetting that this is essentially the last time we even see him. Not because he’s necessarily an interesting character, but because it’s just kind of funny that he takes on the role of Finn and Jake’s “pet rock” throughout the series.

But yeah, don’t have a ton to add from here. This is essentially an episode that has a 9/10 visual appeal, but a 4/10 story, so it’s kind of middle-ground for myself. I enjoy viewing it from a visual point of view, but there’s very little of substance that actually makes me want to come back to this one. It’s not very interesting, not very funny, and the plot has no real focus beyond just being a series of set pieces that allow for some zany animation. I can certainly appreciate that the episode is built around having moments that allow the animation to truly shine through, but again, visual appeal can only support at least half of the episode. If it went full-on abstract and used music or some other art form to support its visuals, I might be a little more forgiving, but I feel like the intention of the episode is that it still wants to grab my attention, and unfortunately, it just doesn’t do so.

That aside, this still is a gorgeous looking episode and I commend Alex, Lindsay, and Matt for their hard work that truly shines through. You can check out Alex and Lindsay’s site here, subscribe to their Patreon, or visit Matt’s art portfolio here. I’ve become an avid fan of their work since this episode, and I’m looking forward to covering their second AT episode, Ketchup, later on!