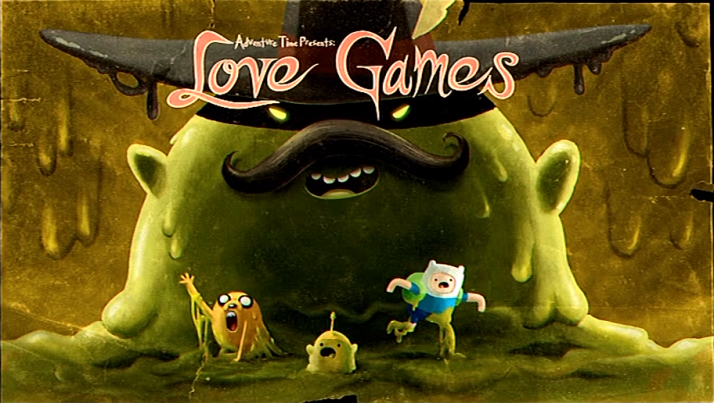 After a much needed break from the FP-Finn drama these past few episodes, we once again return to how Finn is dealing with the break-up, though this time, it’s treated more with humor and a lighter story. After the hilarious Time Sandwich, I didn’t know if Kent Osborne and Cole Sanchez would be able to write something quite as funny, but sure enough (with the help of Andy Ristaino) this episode receives a warm welcoming in my list of very amusing episodes.

The episode starts out silly enough, as we finally get a cameo from Ice King living within the Treehouse. The dynamic between he and the boys is pretty cute; I like how Jake consistently has to yell at him to not interrupt their radio show, almost as if the IK is their little brother. I also like the actual contents of the radio show, though I have no clue who this is being broadcast to, or who even listens to it. This is seriously the first and only time Finn and Jake have ever been seen doing a radio show, so it feels a bit contrived, but eh, it’s cute. It almost feels as if Finn’s statement that he’s done dating ladies and going back to saving them is fanservice to all the people who bitched and moaned for years about how there was too much romance drama within the series. This episode seems to put this drama to bed, but also acknowledges that Finn isn’t as ready to move on as he initially thought. This is triggered by Slime Princess’s abrupt entrance, as she begs Finn to marry her.

This is Slime Princess’s breakout role as a major player, and I’m glad she’s had at least one spotlight appearance in the series (aside from her future role as an elemental). My enjoyment of her character mainly derives from the solid voice acting from Maria Bamford; Bamford has played many, many characters in AT before, though I don’t think any of them match the level of humor (and somewhat sensual overtones) that Slime Princess has been able to accomplish, and has accomplished in Love Games. 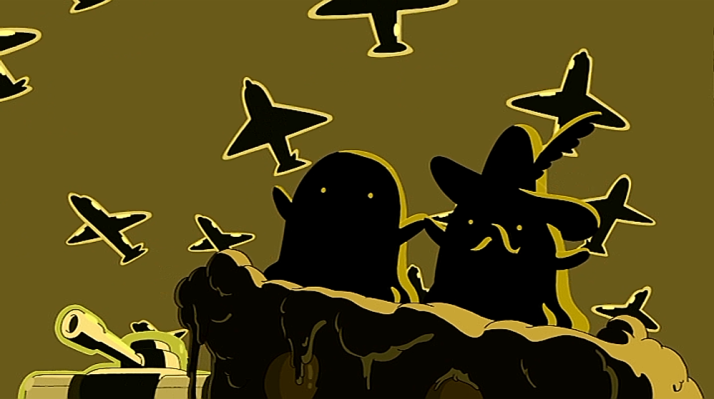 The plot for this one is exaggeratedly silly, but in a way that I quite appreciate. I could care less about the inner politics within the Slime Kingdom, so the fact that they made the conflict between Slime Princess and her sister Blargatha as nonsensical as possible is much more memorable than if I was actually supposed to take this issue seriously. And as we grow to find out, the Slime Kingdom is based off of silliness.

Adding to the many layers of the Bad Lands, we finally get to see the Slime Kingdom! Slime Kingdom is a well-designed, albeit disgusting environment that feels like the visual equivalent to the common cold. It’s purposely grimy, with shades of green and yellow oozing everywhere, but it never feels like an off-putting area, quite frankly because the inhabitants of the Slime Kingdom are quite fun! I really enjoy Elder Plops and Blargartha, who too have some talented voice actors behind them. That’s John Hodgman from The Daily Show voicing Plops and Katie Crown portraying Blargatha, who has done voice work for the Total Drama series, Clarence, and Storks.

And most of the episode from this point on is just a series of gags, namely very funny gags. I love how Jake tags along simply to make puns while he’s shrunken down, pulling at a piece of popcorn. He contributes so little to the story that they didn’t even have to include him, yet he’s used perfectly for comic relief. The “battleground of love” provides for some really enjoyable moments, namely the spooning section of it, which got the biggest laugh out of me in the entire episode. Finn’s absolute terrified expression, coupled with Slime Princess shouting “WRAP THOSE GORGEOUS PYTHONS AROUND ME!” is just hysterical. Also, Blargatha and Guillermo’s spoon is so violent and frantic, I can’t help but laugh at it.

Aside from the humor, this episode also has a decent emotional core. You gotta feel just a bit of sympathy for Finn; even though the fallout of his relationship was at the fault of his own, it’s pretty clear at this point that he does look into these actions with a feeling of guilt. Instead of being able to move on from that guilt and sadness, he’s constantly reminded of all things romantic and is also constantly reminded of the girl that he once loved. He vents his feelings through the song “I Can’t Get Over You,” which is one of the better post-Sugar songs in the series. Shada’s voice croons nicely and carries across an attitude of sincerity and sadness. Finn’s issues become much more defined by the end of it: no matter what he does to try to distract himself, he simply can’t get over Flame Princess. 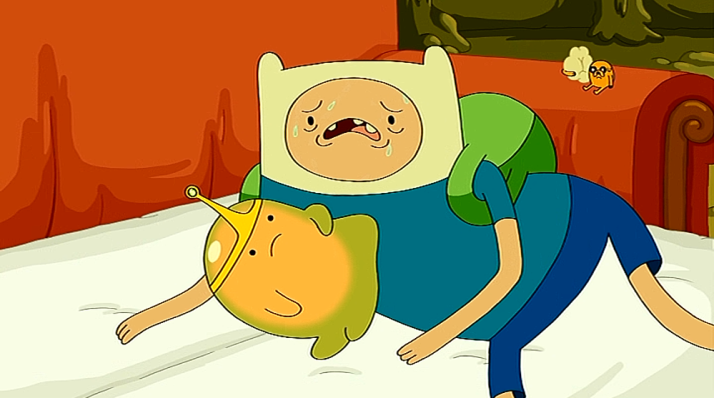 This unwillingness to deal with anything related romance related is what leads to Finn finally confronting Blargatha, where it is revealed her husband was a mere pile of gelatin the entire time. Again, a fittingly silly resolution to a fittingly silly conflict. The only thing more ridiculous than that is that it apparently broke no rules or laws within the Slime Kingdom. It just means that Blargatha is disqualified from the competition. Slime politics are weird, right?

The one gripe I have with this one is the very ending, where SP barfs as Finn attempts to kiss her. I get that it’s for the subversion, and is somewhat of a “fuck you” to Finn for reacting the same way earlier, but it doesn’t really make any sense. What happened to when SP wanted to get into Finn’s pants in Prisoners of Love? Unless she spontaneously recalled that Finn pee’s his pants constantly, I’m not sure where exactly this sudden disgust comes from. She seemed willing to get down and dirty with Finn in the previous ten minutes of Love Games. But, as this episode has set out to prove, nothing makes sense in the Slime Kingdom.

And that’s mainly what makes this episode so fun. It’s simply enjoying this fun new area with these fun characters and a silly premise. It’s nice to see that Finn is still dealing with the issues of his break-up and that they haven’t all just vanished and also nice that this episode is amusing and light to balance out the heavy weight of the romance drama. I love episodes like Frost & Fire and Too Old, but I’m also glad that every episode following it isn’t some big, somber journey. This is what Adventure Time embodies: a perfect blend of comedy and drama with fun and likable characters to carry it through. And all I know is I definitely am checking out the next club I see with a triple-cray rating.

Favorite line: “I will be watching you spoon, measuring and assessing your love by posture and overall vibe.”